We are announcing the second of four concerts from the livestream series of duets entitled “Tamara Obrovac Transhistria deconstructed”, a duet between Tamara Obrovac and Žiga Golob on double bass, which will be held on Sunday, 7 March 2021 at 17:00 hours.

We prepared this series so that the concert activity would not completely die in these strange and uncertain times and we therefore wish to thank all of you who watched and supported the first concert, Tamara’s duet with Fausto Beccalossi on accordion, held on 31.10.2020 in front of the beautiful Church of St. Rocco in Draguć, a small and charming Istrian village, which was so far viewed by around 12000 viewers on Tamara’s  official Facebook and Youtube channel.

We had a great feedback, received many fantastic messages so I’m very glad if we succeeded in our intention to bring the experience of watching online concerts to a new level, both visually - by choosing the locations where the concerts will be held, and musically, by proposing a new concept – the deconstruction of the Transhistria ensemble into 4 duets of Tamara Obrovac with each member of the band.
The MedVid Production crew, responsible for a truly great recording will be with us on the next concerts as well.

The form of the duet brings a new musical approach, a new way of performing of Tamara’s compositions, and will set the stage for new “worlds” of improvisation, immanent to all of the musicians of the Transhistria ensemble.
“Žiga is the excellent and inovative double bass player, one of my oldest collaborators, so I’m looking forward to our first duet ever,” says Tamara.
The concert will take the form of a 45-minute performance in which the two musicians will combine Tamara’s compositions and their free improvisations, inspired by the concerts’ location. We will not reveal the location in advance, we will only mention that it has been carefully chosen, beautiful, but less known, and also different then the first one.
As the source of Tamara’s musical expression Istria abounds in such small gems, which we would like to combine with music and visuals, hoping that this beauty will brighten up these gloomy times at least a little.

The audience plays an important role in our efforts to hold these concerts even if they are online, so please support our efforts by sharing the link to the livestream concert and of course watch the online concert itself on Sunday 7 March 2021 at 17:00 h. We would appreciate your support.

“Thank you in advance and I hope to see you soon in full halls, in direct contact where we may exchange love through music as we have always done. Until then, take care of yourself and others.” 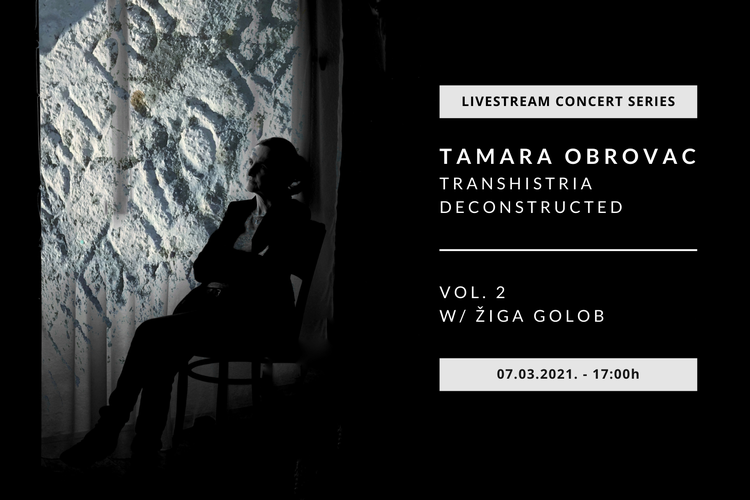