Remaining faithful to her expression in which she blends Istrian tradition and contemporary jazz, Tamara presents new compositions written purposefully for this new musical formation.
New compositions were presented at a series of concerts in Slovenia and Croatia by a new formation of musicians in which, in addition to her enduring collaborator Krunoslav Levačić on drums, she is also joined by two great Italian musicians; Stefano Battaglia on piano and Salvatore Maiore on double bass.
The band was also invited to the live show on the Croatian National Television. The new songs were greatly interpreted by this excellent musicians, the reaction of the audience and press in Slovenia and Croatia was great.
In this new project Tamara has once again given an unique musical concept, which successfully transposes combination of jazz, and traditional music, to music of the modern age.

In June 2019 the band published a CD “TransAdriaticum” for Austrian Alessa Records, as the Tamara's 12th author album.
Release tour started with the concert on Trondheim JazzFest in Norway, followed by concerts in Austria, Slovenia and Croatia, and the reaction of the audience and the international media was very good as well, some are listed below.

“Tamara Obrovac - a new and exciting acquaintance ...with her fine trio, she gave us a supplement of something we didn't know we needed."

Apotheosis of sensibility
"The album and the promotional concert are the confirmation of a series of wonders abounding in the music of Tamara Obrovac. Through her music, she speaks about life and easily transforms her personal, concrete experiences into universal truths. With an archaic language, she manages to communicate in a modern and appealing way. This is an apotheosis of Istria, of its melodies and of jazz. A jazz that in Tamara Obrovac combines, seemingly completely distant differences. Above all, this is the apotheosis of a deep and sincere sensibility.”

"On the new CD, the outstanding Croatian singer Tamara Obrovac remains in her specific sentimental space, of course, at the highest level, with a music codex and messages that shy away from the superficial.
Obrovac sings about night hags, slaves, pain in one’s soul and the glint of tears. Touching.
Of course, this venture is only possible with congenial musicians – Tamara’s Croatian drummer Krunoslav Levačić and two top-class Italian musicians: Stefano Battaglia on piano and Salvatore Maiore on double bass."

"Published on the international market, the TransAdriaticum CD is a great export product.
TransAdriaticum is a great example of local music that is suitable for world-export, not only because it shares the same values and cultural importance of recognizing a new era but because of its understanding and feeling of both the traditional and contemporary jazz, use of the local “spices” and the brilliant, graceful performance of Tamara Obrovac and her musicians.
Tamara Obrovac has long been performing abroad and the old saying that if you dip your toe into the ocean you are connected to the whole world can certainly apply here. Of course, if such “toes”, her collaborators and her unique vocals, produce such exciting music.
This time with a new set up and a different tone, Tamara again confirmed that she is a leading Croatian musician who regularly achieves a unique “full-on” contact with her collaborators, which consequently produces such feats."

The strenght and the greatness of an individual musical expression
"An excellent contemporary jazz album that will surely arouse great interest among jazz lovers around the world..."

“On this “Transadriaticum” album, Tamara Obrovac again confirmed her unique contact with her musicians and once again proved as a great example that even local music can become a product of worldwide export! Beautiful!”

"The selection of collaborators, the identity of this quartet, the search for balance in the dramaturgy of the compositions as well as the right balance of power in the subtlety ratios of the expressiveness and unbridled improvisation are the reasons why Transadriaticum may be one of Tamara’s best albums ever.”

"TransAdriaticum exudes with refined interactions, Tamara’s interpretation and an extraordinarily nuanced overall dynamics of songs that - though mostly sad and introspective - radiate an extraordinary passion for life."

“With her emotional and distinctive way of singing and the compositions in which she weaves Istrian musical motifs with those of different parts of the Mediterranean and America from which jazz derives that she performs and uses as a catalyst for other musical styles, Tamara Obrovac presents her deepest and most traditional roots in a modern and avant-garde, but never vague or vain way.”

"A charming and profound record, also remarkable for the quality of the production and a distinguished sound: a work that stirs an undeniable interest for handwriting and interpretation, thanks to the first-rate instrumentalists and the intense sensitivity of the vocalist."

"How would the jazz standard of Mongo Santamaria "Afro blue" sound in the dialect of the Croatian part of Istria? Just as exotic as it is harmonious. This is the only foreign composition on the new Tamara Obrovac album with her TransAdriatic quartet.
The most prominent member in the Croatian-Italian band is the pianist Stefano Battaglia whose way of playing positions the singer between the Balkans and the Mediterranean and emphasises the jazz sound of the ensemble.
Poetic lyrics, a voice full of pathos and passion and the engrossed accompanying piano trio complement each other and blend into an innovative Balkan-Jazz expression."

"While the singer, therefore, obviously plays an intense leading role, boasting a warm and flexible voice and a style always at the service of interpretation rather than virtuosity, Battaglia, for his part, carves out splendid commentaries in his solo sections, characterized by strong lyricism, as does Maiore on several occasions. Morover, all three musicians construct open and complex scenarios within which the singer has the freedom to freely express herself by improvising — listen to the central part of “Galiotova pesan”, where Levačić’s drums also play an important role, or to the double bass and drums in the introduction to “Afro blue Istra”.
This suggestive and personal work cannot simply be narrowed down to “ethno jazz”. “Slavuj piva”, based on a traditional text, strongly dramatized by Obrovac and featuring a beautiful piano and double bass introduction, the sweet lullaby “U dnolu srca moga” and the aforementioned “Galiotova pesan”, based on a poem by Croatian poet Vladimir Nazor, emerge as particularly compelling."

"With a new quartet, Tamara Obrovac takes on sounds and repertoires upon which she concentrates her expressive world of a work that, therefore, adds new facets to the musical expressions of the singer. The jazz approach of the TransAdriaticum Quartet is more immediate and present, gaining a more significant position in the overall discourse of the disc. Thus, different ingredients are stratified and combined: notes of ancestral sensibilities rooted in the region are found side by side with free and less formal expressions - a jazz standard like “Afro blue” is covered and the emotional tension of poetry set to music is used. Above all, Tamara Obrovac looks at numerous experiences of syntheses, cultural convergences and linguistic encounters: overcoming boundaries and comparing different expressions and worlds represents an authentic categorical imperative for the singer. Track after track, different identities coexist, maintaining their own particular characters and enriching each other, owing to the mutual closeness and dialogue between the musical personalities of Obrovac, Battaglia, Maiore and Levačić." 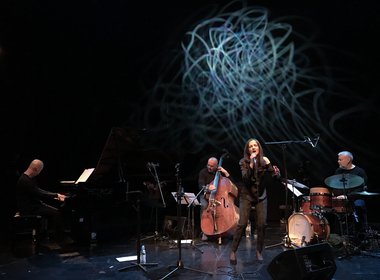 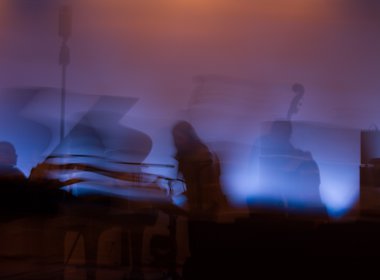