The music of Tamara's international Transhistria Ensemble is a unique combination of jazz with the elements of Istrian and Mediterranean folk music and many elements of modern music.

The succes of this merger is certainly due to Tamara's incredibly fine-tuned sense of the istrian melody and dialect, combined with  jazz craft, but also  due the  artistic expression of this group of top-ranking musicians which does not rely on existing jazz cliches, but on their acute sense of intuition for eaach particular composition.

It is precisely this freedom of music expression and improvisation with which these great musicians shape Tamara’s unique music that can be singled out as the most important feature of Transhistria ensemble’s performances- the ensemble Tamara most frequently performs with and with whom she has recorded most of her albums. The ensemble features Slovenian double bass player Žiga Golob and Croatian drummer Krunoslav Levačić, who have been with Tamara from the very beginning, since her first album “Triade” in 1996; Slovenian guitarist and mandolin player Uroš Rakovec, who joined them in 2003 during the recording of the album “Sve pasiva” and Italian accordionist Fausto Beccalossi, who has been a permanent member of the ensemble since the recording of the album “...is faraway...” in 2005.

This exceptionally musical and creative band which is remarkable for the obvious alchemy between all its members shows its best side at live performances when it plays in a spontaneous and relaxed way ; their interpretations of Tamara's unique music are suffused with spontaneity, inventive improvisation, freedom, humour and the ability to communicate with the audience, while Tamara's voice is equally impressive when she sings lyrics and when she performs vocalizes...

Thanks to their experience and enviable musical skills, every member of the band is always ready for shifts and unexpected changes inspired by the atmosphere and by the mood of the moment.
Since 2003 the band published  3 studio albums, and their first live album Live@ZKM is published in December 2018. for Croatian Composers Society label Cantus, recorded on a concert in Zagreb 2016.

“Tamara’s almost telepathic connection with her band of international musicians has made this concert practically a surreal experience, in which the metaphysical strength of common creation was felt in every song…”  Ravno do dna / Dragana Glivetić, concert ZKM  review 2016.
__________

Tamara Obrovac / Transhistria Ensemble
Base of their music is Istrian national heritage, arranged through moments of jazz, classical music and even tango, but also through long fragments of completely unusual sound that can hardly fit in standard genre classification. Dynamic and melodious. Loud as much as gentle, warm and sophisticated. Not pathetic whatsoever. Occasionally ferocious but not aggressive. Workmanship of the band members, their attractive solo jaunts and, among all, vast vocal capacity of Tamara Obrovac, her charm and untrammeled, honest, facetious and seductive performance, will be memorized for a long time." - D. Domanovic, Gradjanski, Novi Sad, concert review, May 25th 2004., Serbia 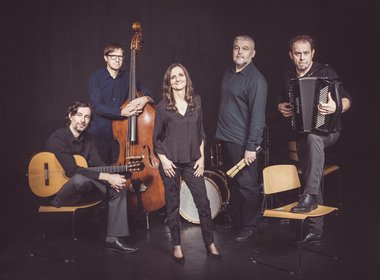 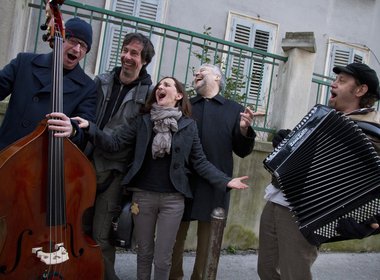 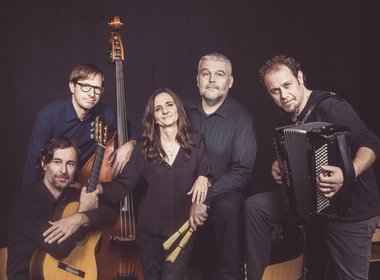