The third of four concerts from the livestream series of duets entitled “Tamara Obrovac Transhistria deconstructed” the duet with Krunoslav Levačić on drums, was held infront of the beautiful fortress Possert on 24.04.2021.

We have prepared a series of live stream concerts entitled “Tamara Obrovac Transhistria deconstructed” so that concert activity would not completely die in these strange and uncertain times.

So we wish to thank to all of you who watched and supported the first two concerts; a duet with Fausto Beccalossi on accordion held on 31.10.2020 in front of the beautiful Church of St. Rocco in Draguć, a small and charming Istrian village, which so far had more than 12000 views on Tamara’s FB and Youtube channel, and a duet with Žiga Golob on double bass, streamed 07.03.2021 from the picturesque Renaissance square in Svetvinčenat with over 8000 views so far. Thank you.

We had a great feedback, received many fantastic messages so I’m very glad if we succeeded in our intention to bring the experience of watching online concerts to a new level, both visually - by choosing the locations where the concerts will be held, and musically, by proposing a new concept – the deconstruction of the Transhistria ensemble into 4 duets of Tamara Obrovac with each member of the band.

The MedVid Production crew, responsible for these truly great recordings will also be with us at the following concerts.

The form of the duet brings a new musical approach, a new way of performing of Tamara’s compositions, and will set the stage for new “worlds” of improvisation, immanent to all of the musicians of the Transhistria ensemble.

“Some completely new musical spheres have opened up in the two duets so far, and I was therefore especially enjoying to the "primordial" combination of drums and voice and making of new sounds with my most loyal collaborator Kruno Levačić, an incredibly ingenious musician with whom I grew up musically and took the first steps in the world of jazz and improvised music, who has from the very beginning played in all my ensembles and contributed to all my CD-s".

This third duet was held in a new beautiful and less known location in Istria medieval fortress Possert, and had the usual form of a 45-minute performance (with no intermission) in which the two musicians was combining Tamara’s compositions and their free improvisations, inspired by the concerts’ location.

As the source of Tamara’s musical expression, Istria abounds in such small gems, which we would like to combine with music and visuals, hoping that this beauty will brighten up these gloomy times at least a little.

Thanks for the support to our efforts to hold these concerts even if they are online, by watching and sharing the link to the livestream concert.

“I am eagerly waiting to see you again in full halls, in close contact and the exchange of love through music.
Until then, take care of yourself and others.”

Thanks for the support:
Ministry of Culture and Media of the Republic of Croatia, the Region of Istria and the Municipality of Cerovlje
Production: Artistic organization Transhistria ensemble / transhistria@tamaraobrovac.com / www.tamaraobrovac.com
Livestream: MedVid production 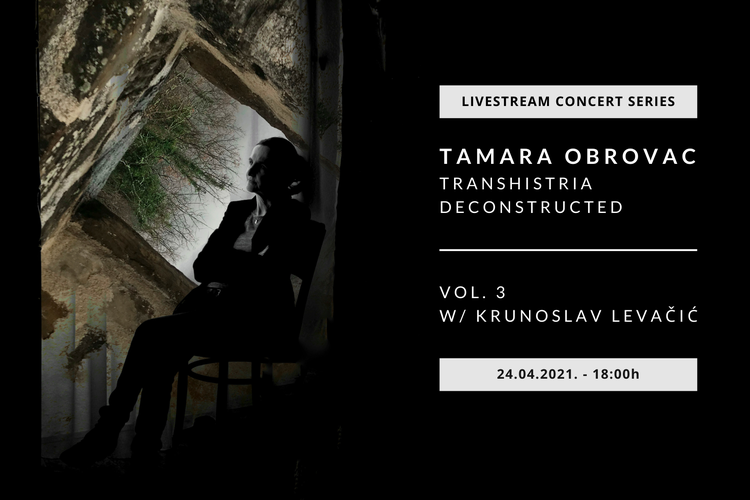