The concert followed the idea and the concept of “Transhistria deconstructed” by being held at the culturally and visually interesting location of the bastion of the Kaštel fortress (Historical and Maritime Museum of Istria) which offers a beautiful view of the city and especially the Arena in the bastion’s background, as well as its musical concept consisting of an uninterrupted sixty-minute performance of Tamara’s selected compositions connected by improvisations inspired by the concert’s location.

The number of spectators was limited, in adherence to the epidemiological measures in force, but it was possible to follow the concert via (free) livestream on Tamara’s Facebook and Youtube channels.

More on the project:

During this series we tried to bring the experience of watching online concerts to a new level, both visually - by choosing less exposed, attractive, heritage sites in Istria in which the concerts were held, and musically, with a new concept – the deconstruction of the Transhistria ensemble into 4 duets of Tamara Obrovac with each of the members of the ensemble.

The concerts were held at four diverse and beautiful locations during all four seasons of the year.

As the source of Tamara’s musical expression Istria abounds in such beautiful locations – we explored the idea of fusing the music with the inherent beauty of the locations, hoping to brighten up these gloomy pandemic times at least a little.

Judging by the really large number of reviews as well as the widely positive reactions, we believe that we have succeeded in that, and we wish to thank everyone who followed and supported us.

The duet concerts had the form of uninterrupted 45-minute performances during which the musicians performed Tamara’s compositions and engaged in open improvisations inspired by the concerts’ location.

The form of the duet brought a new musical approach, a new way of performing of Tamara's compositions and opened some new “worlds” of improvisation that the musicians of the ensemble, pursuing the musical form of an uninterrupted 60-minute performance, presented at the final concert on the bastion of the Kaštel fortress in Pula, Tamara’s hometown.

The team of Pula's Medvid production who were responsible for the superb video support so far was with us at this concert as well.

"Transhistria ensemble has been active in this line-up since 2005, since then we have been connected by music, love and friendship.
I am happy to be surrounded by such great musicians with whom I can share the immense joy of making music and musical communication that receives a new form, a new expression, at every concert.
I enjoyed performing in duets with each of these exceptional musicians, during all the concerts there were some new musical surprises, so I am glad that we present edsome new and different musical worlds at the bastion of the Kaštel fortress in Pula, with a beautiful view of my hometown and that we shall present yet again some new and different musical worlds, performances and improvisations.”

____________________
Thanks for the support:
Ministry of Culture and Media of the Republic of Croatia, the City of Pula, the Tourism Office Pula, the Region of Istria
Production: Artistic organization Transhistria ensemble
Livestream: MedVid production
Concert organization: Rock caffe Pula 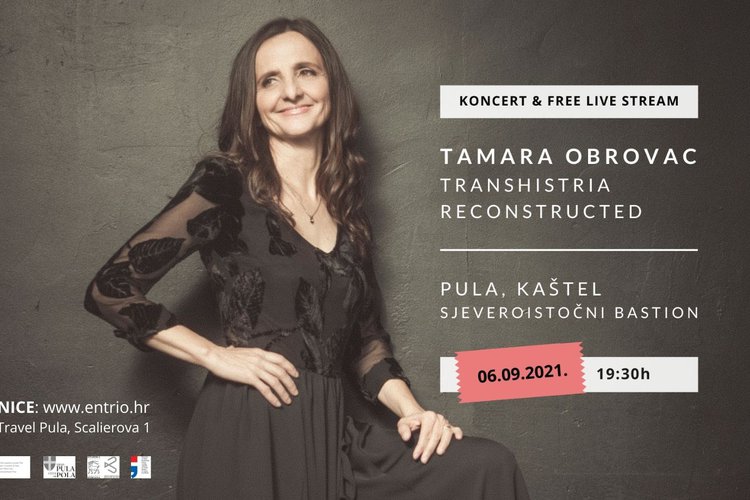