If you have ever been at a Tamara Obrovac’s concert, you have seen for yourself the incredible freedom, spontaneity and inventiveness that characterize live performances of this artist with her various accompanying bands, all composed of top musicians; but although she has published 10 studio CDs, she hasn’t released a live album yet.

With a concert of her Transhistria ensemble at the Zagreb Youth Theatre, Tamara marked twenty years of her recording career, and tenth author album, Canto amoroso.
The concert, which was recorded on November 26, 2016 and is now being released as a live album by Cantus, Croatian Composers’ Society label, as the first “live” album in Tamara’s career. By two most important croatian daily papers, the album is chosen among the top 5 concert albums as well as among the top 5 Croatian jazz albums in 2018.

"In front of a sold-out crowd, the Croatian singer and composer performed a concert recorded as live@ZKM. The two-disc set features 11 of Obrovac's compositions, written alone and in collaborations, taken from her back-catalog of nine albums, all performed with passion and style by the singer and her fellow musicians. This is an album characterized by passion from all of the players, but especially Obrovac. Even run-of-the-mill songs would sound convincing and evocative in the hands of the Transhistria Ensemble. The combination of top-class performers and Obravac's superb compositions, along with excellent sound quality, ensures that live@ZKM is an exceptional live album."
All About Jazz / Bruce Lindsay (GB)
_____________
"..the atmospheres are intense without being frantic, the happy mixture of timbres always puts the melody in central position and the narrative approach always puts emotion at the core, putting aside any sterile virtuosity. A quintet capable of a firm balance and, above all, capable of reminiscing the contemporary listener of the ancient purpose of the song: the sharing of stories and states of mind."  Jazz Convention / Fabio Ciminiera (IT)
_____________
"This is not an Jazz cliche, this is the Mediterranean on acid. .... an anthology live album. The performance was completely cleansed of unnecessary solos and turned into a shared musical adventure on uncharted terrain."
Express / Ilko Čulić
_____________
“From the first to the last tune, I was proud to be a firsthand witness to this amazing jazz story, which has in the last couple of years become not just Croatian, but European phenomenon…“   Terapija.net
______________
"Tamara’s almost telepathic connection with her band of international musicians has made this concert a practically surreal experience, in which the metaphysical strength of common creation was felt in every song…"
Dragana Glivetić, Ravno do dna

Here are few words that Tamara said about the concert;
Zagreb is the city in which I spent my student days, the city in which I discovered jazz and in which I have performed numerous times. This is why I was especially glad that the concert celebrating 20 years of my recording career and my tenth CD was held in the Zagreb Youth Theatre, one of my favourite halls.
The atmosphere in the hall filled with great audience was trully wanderfull, the band played very good, and the recording is excellent, all you need for a great live album!
I would like to thank the musicians of Transhistria ensemble, our faithful audience and all those who participated in the production of this special concert.

Album Live @ ZKM will is available in Croatia records Music shops in Croatia, and online in Cantus web shop.

Here is how the concert started, and how the audience welcomed Tamara: 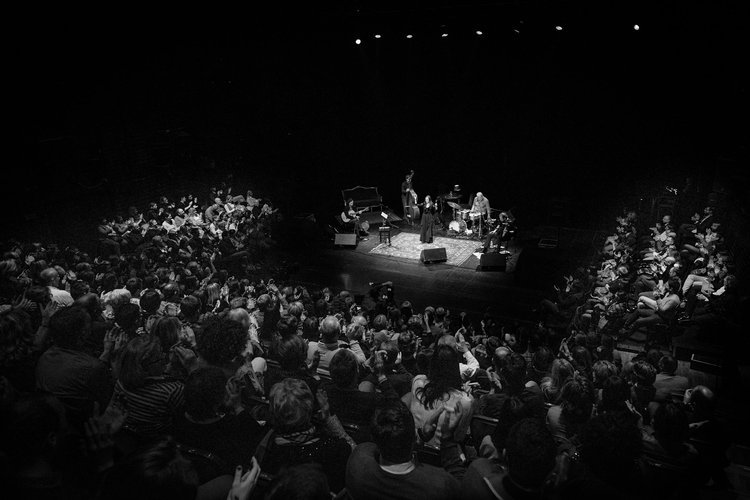